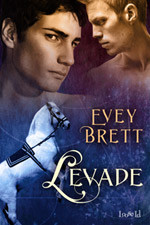 My (er, Evey's) new e-book is out from Loose Id! If anyone would like a review copy of this or its predecessor, Capriole, just holler. Also, my good friend Jessica Freely (aka Anne Harris) is hosting me and Carrma over on her blog, and all you have to do is leave a comment for a chance to win a copy of both books.

Aided by Lukas’s herd of Lipizzans, Felipe learns that Lukas is alive and initiates a rescue. Their reunion does not go well. Lukas can’t remember Felipe nor can he answer questions about where he’s been. Despite Felipe’s repeated seduction attempts, Lukas’s condition deteriorates until he’s more horse than man.

Heartbroken, Felipe is afraid that unless Lukas can come to terms with the devastating truth of who—and what—he is their love will be lost forever.

Note: This book contains explicit sexual situations, graphic language, and material that some readers may find objectionable: dubious consent, male/male sexual practices, violence. While this book is primarily male/male, there is some m/f sex.

Heh. I think that's the tamest warning I've ever gotten from them.

So. Publisher took Demon Story 2. Yay! And my editor just sent me a bunch of good notes on it, because it still needs some work story-wise. Sent in a proposal for Demon 3 and have to work on that one more too. And edits for the deer story should be here soon. Yikes. I'm feeling like a real writer now, what with all the juggling edits and deadlines and such. But this means three e-books out next year, two under one name, the deer story under Nica.

Orossy/Oroshi is. . .on hold. Meant to at least get an outline done for Nanowrimo. Got distracted by Demon 3. Ah, well. I'm still writing about Orossy everywhere but IN Orossy.

And, about three weeks ago,

dancinghorse rescued the lovely Ms. Gabriella, who needed a home, like, ASAP, and she's Ephiny and Tia's mom and had been here before. So, behold, fabulous #9: 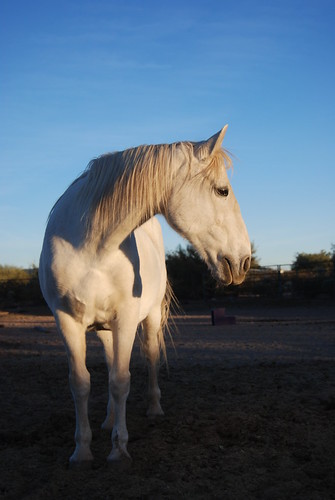 And, just 'cause I was out taking pics, here are a couple more favorites: 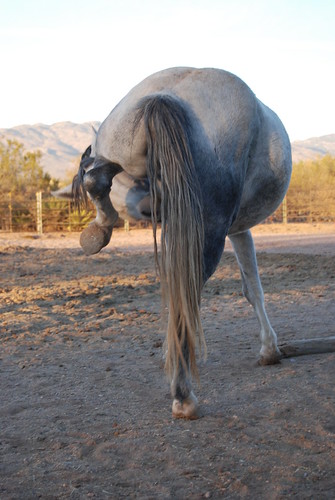 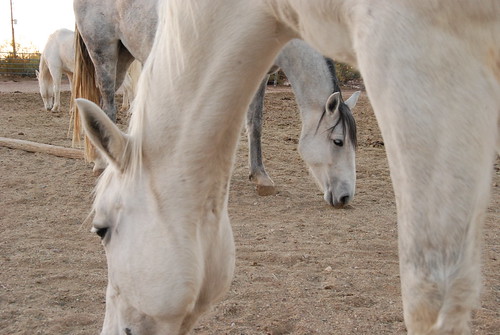 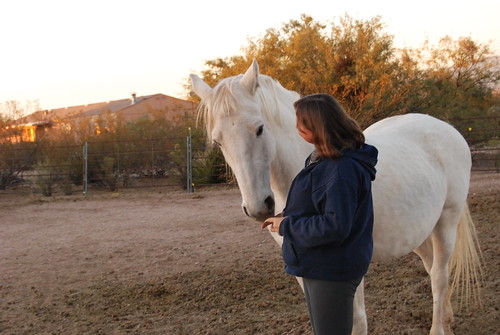 First up, House of the Star by Caitlin Brennan, aka

dancinghorse. I must admit I'm biased towards this book 'cause the cover pony, Pandora, is in my backyard. :>) And see the horse in the icon? Made that this morning in a horse-shaped pan from Ikea.

sartorias also wrote a lovely post about the book, Horse Girls and Magic.

My good friend Pearl North, aka

Congrats to both! Y'all run out and buy them now!

Whee, am in the middle of horse camp with

We also did horse yoga.

All right. I am lousy at updating.

Last week was Camp Lipizzan, with

coraa. Much fun was had, along with good food.

One of the new additions was Yoga with Horses, which involved seven people hanging out in the arena with seven horses and doing a variety of stretching and breathing and ommmm-ing while the horses wandered in and out of the group.

dancinghorse did a nice write-up of the experience here. Pics by yours truly. :>)

The next day we all had lessons, which was much enjoyed by both humans and horses. Carrma was quite pleased at being Trail Pony and Lesson Pony for

rachelmanija, and enjoyed running her into the low-hanging tree branches, which she's NEVER done to me. -whistles innocently-

janni. They turned out really, really well all around. For example, take a look at the one she just posted on Facebook of me and my girl Carrma. Everybody go awwwww!

Also, while Lynne was here we had a rain storm, which means lots of muddy, leaping Lipizzans. ( Collapse )

Ummm. Writing-wise, still in the middle of several things. Turned in final edits for the e-book out January 17th. Woohoo! Should be getting a cover soon. Should be getting edits on the reprint of the Deer story soon. Am figuring out that I would be a good horror writer, and writing horror is fun, and am sort of experimenting with it on the prequel to the deer story (aka the ill-fated Raven story) which, since it involves demon possession, really is horror. :>p Orossy is kind of on hold. Again.

Heading off to World Fantasy next week with

Hey lookee, here's me reading from Oroshi. :>p Shoulda got a wee bit closer to the mic. Oh well. But, hey, it turned out well.

And now back to packing. Whee. The books are moved. have another pile of boxes loaded in the car. Will have to move the furniture (everything is taken apart) and I should have a horse in my backyard early next week. :>)

First woohoo: Hey, look, the Lambda Literary folks have my pic up along with those of all my classmates for the LGBT Emerging Writers Retreat. Two weeks. EEEEEEE! No, Orossy's not done. Nowhere near. I suppose I'm letting it sit now until I get there and hopefully something will click and I can move. Been working on edits for the Carina book, anyhow, and I have eleven stories to crit for the workshop. EEEEE!!!

Evidently, it's an "LGBT Paranormal Urban Fantasy." You can buy it and read an excerpt here.

Amun, born with the gift of seeing the auras of other fae, is on a mission to aid his lover Loridan, the ailing fae prince. While there, Amun finds Shane, a young fae with gifts for both healing and sexuality who apparently has only one thought in his head: to get Amun naked and in his bed.

But Amun doesn’t have time for Shane despite his deep attraction. He’s busy searching for the madman who is corrupting nature by introducing fae gifts to humans and killing Loridan in the process. He’s also preoccupied with the knowledge that while Loridan won’t touch him anymore, the prince apparently has no problem inviting Shane into his bed.

Shane won’t give up on sleeping with Amun, but by the time Amun realizes how much he loves Shane, it’s too late. Amun must go on a desperate search to save both Shane and Loridan while struggling to accept the first rule of the fae: to be true to one’s own nature.

So, I had another lesson on Khepera yesterday. He wasn't giving me ANYTHING he didn't have to (or rather, what I didn't earn. Or something.) A bit mouthy and disinclined to stand still. Not to mention that lovely pile of wet hay that got dumped out of the water barrel. Food. Nom.

Lots of groundwork, getting him to use his whole body and walk with long strides. Trying to keep a circle which is a heck of a lot harder than it sounds. Moving him out into a bigger circle and back in, and trying to push him and use the whip to tap his butt and make him go at the same time. My arm got tired after a while. Anyway.

Did a bit of the same thing while on his back. Circles. Move him where I want him. Hands, hands, always hands. And again trying to hold the whip so I can tap his butt when needed. Then we moved on to trot, which is more adventure, because he likes to go at a nice clip and S and I don't really want him to go that fast. So, more butt in saddle to get him to slow down. He broke into a canter once, because he wanted to go, but he slowed down soon enough.

More trot. Aaaaand. . . SPOOK! Followed immediately by a bit of canter, which, um, I don't technically know how to do yet. But boy it felt nice.

From the saddle, it didn't feel like much worse than getting tossed around a bit when Carrma stumbled. And, actually, I wasn't scared, not like I was when Pandora ran off with me one night or Carrma did a couple of times. Maybe because I know more now, but I also trust Khep and know he didn't do it to be mean, and he figured out I was off balance right away and came up under me to fix it.

dancinghorse said he hopped about four feet off the ground. Um. Probably I'm glad I didn't see or realize that at the time.

Anyhoo. Most likely it was a spook/temper tantrum because he was getting frustrated, and this was his way of saying, "No, human, that's enough, do it THIS way!" And I did. Everything after that was much better. Nice, slow, controlled trots, and I figured out how to get him to stay at the same speed when he tried to go faster.

Anyway. Adventurous day, and I'm actually a wee bit sore from it. Khep was quite smug afterwards. Happy horse. He got his cookies. And the better news is that I've graduated to intermediate rider, YAY, and I can ride Khep outside of lessons now. YAY!

(Of course, Carrma still gets first priority, because she's Carrma.)

Alas, there are no pictures from yesterday, so I'll give you another sunrise from the parking lot pic. (And I should go to bed now, but I finally got the Roku box up and working, and OH LOOK, it's a COWBOY CHANNEL! WOOHOO!!!!)

Here's me and my ridin' hoss, Khepera, courtesy of So I, like several of my writing buddies, I'm participating in the Clarion write-a-thon. I went to Clarion in 2005, the penultimate Michigan class, and what mattered the most to me (besides the people) was that it made me feel like a real writer and part of the SF/F community even though I didn't have anything published yet. If it weren't for Clarion, I'd probably still be wandering around writing stuff and wondering why no one wanted it.

My page is here. My overall goal is to get Orossy/Oroshi DONE. Six weeks? Yes I can! (at least, as long as the plot bunnies keep hopping.) And when my brain is fried from that I'm going to work on another e-book or three.

My prizes: $10 or more and I'll send you an e-book of your choice (this includes NATURE'S OWN, due out in a month). Three of my e-books were originally Clarion stories!

In other news, I am now officially participating in the Clarion Write-a-Thon, benefiting Clarion UCSD (the latest incarnation of "my" Clarion that I taught back along). My page is here. I've promised to write at least 500 words a day of new fiction, one way and another. More if I can. From July 27th-August 7th. Er, go team go?

Aaaaannnnd I've sweetened the pot. Donate at least $250 in my name and you're entered in a drawing for a free weekend (well, 3 days/2 nights, any time of the week) at Camp Lipizzan. If more than one person does this, the rest will get prizes: signed books, ARC's, a signed ms. if you ask really really reallllly nicely.

I think it will be fun. meep.

If any of you have a few ducats to spare for a great cause, I would be very grateful if you'd help Judy out. In fact, anyone who sends me a receipt saying they've donated, even if it's only a dollar, will get their choice of the following:

A custom poem written by me, any style any topic

If you sponsor Judy for more than $20, I will offer signed copies of Judy's books A Wind In Cairo and Alamut in a random drawing.

Also, anyone who reposts this will get a free one card tarot reading and a pony!
Collapse